Crossing the Chasm to Revenue and Profit

Entrepreneurial ventures bring to market and diffuse new products and services.  The end goal, never to be forgotten, is to sell enough at a profit that the firm makes money.  Also  these pursuits of passionate purpose deliver real rewards of meaning and connections. Delivering financial results is difficult.

Everett Rogers developed a theory on how, why, and at what rate new ideas spread.  Diffusion of Innovation explains that diffusion is the process by which an innovation is communicated over time among the participants in a social system.  Technology makes its way through the population in a bell curve distribution called the Technology Adoption Life Cycle. 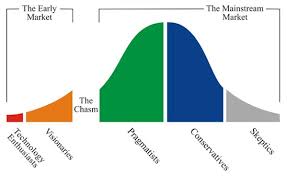 The Innovators, as explained by Geoffrey A. Moore in his book Crossing the Chasm, are Technology Enthusiasts and the first customers for anything that is brand-new.  "They don't have any money.  Only with their endorsement can a discontinuous innovation get a hearing, and so we often "seed" (read "give") products to this community to gain their support."  These techies desire to explore.

The Early Adopters are Visionaries that have an extraordinary influence because they will bring real  money to the table.  Yet each "Visionary demands special modifications that overtax the R&D resources of the fledgling enterprise. "  They desire to exploit the new capability.

Innovators jump on the product at first, followed by Early Adopters, the Early Majority (Pragmatists) and Late Majority (Conservatives), to finally reach the Laggards (Skeptics).  These various players have different interests.  An entrepreneurial venture needs to go after the Early Market, which represents just 16% of the adoption.  This typically takes a minimum of 10 years.

This summary (https://fourminutebooks.com/crossing-the-chasm-summary/) states, "People in the early majority are much more pragmatic. They don’t want big changes and huge innovations, but rather incremental improvements based on using proven products and solutions. The majority wants to buy from established brands, but without having the majority buy your product, you can’t become an established brand.  This dilemma is what Moore calls “The Chasm” and it’s something all companies must overcome, if they ever want to see their product become successful and reach the majority of the population."  How do you cross the chasm?

"When you contrast yourself with a market alternative (the traditional way of doing things) and a product alternative (a competitor, who uses the same technology, but in a different industry), you can easily position yourself as the leader in the new, combined field. This claim will allow you to focus exactly on your initial niche and eventually take the majority of the market share there, so you can then expand and dominate the rest of the market as well."

Fourminutebooks gives this example.  "Dropbox could’ve positioned itself by saying: 'For private PC users, who are sick of carrying files from one PC to the next via USB stick, we offer a hardware-free file syncing solution. Our service makes your files available on any device with an internet connection, just like YouTube does with video, but with any type of file you choose.' ”

Another example is Radish Systems' initial focus on healthcare.  For healthcare businesses which have callers frustrated by cumbersome automated phone systems and dreading interactions with hard-to-understand live clinicians, Radish offers 'voice with visuals' self-service and live assistance.  True Visual IVRs (Interactive Voice Response systems) aka Virtual Nurses offer callers from any phone with access to a browser via the Internet the ability to see, hear,  and store complex information.  This is similar to what conferencing firms do with video, but with any phone call compatible with existing infrastructure while sharing any visual.

Entrepreneurs need to cross the chasm by focusing on a specific niche to become its market leader.  Then expand. 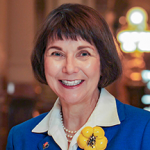